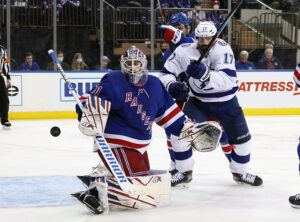 Welcome back to another day of NHL Predictions. Each day, Last Word on Hockey takes a look at the games that are happening and gives our predictions for each one, breaking down head-to-head and other factors that may play in. We also have a featured game of the day, which is considered must-watch TV. Today’s featured game is the New York Rangers vs Tampa Bay Lightning.

As both teams are on a bit of a skid winning two of their last five, this will be a battle of the top two goaltenders in the world. Everyone knows there’s only one reason the Rangers are where they are, it doesn’t need to be said. The Lightning is where they are because of offence, defence, and goaltending. A one-dimensional team vs a clearcut powerhouse. The matchup in net is evident but where do they match up outside of the crease. The Lightning is a dump and chases forechecking machine. On the back end, they have one of the best puck-moving cores. The Rangers are going to need pressure. They’ll need to rely on guys like Barclay Goodrow who has the ability to chase and recover pucks in the offensive zone.

Tampa will have to do a good job of being disciplined and covering the slot on their own end. Special teams could be the deal-breaker in this one as the Rangers have the second-best powerplay in the league in addition to a pretty good 82% penalty kill. The defending cup champs struggle when it comes to the extra man on or off. The Rangers should look to break up play in the neutral zone while getting as many pucks on net as they can 5v5.

Not much to be said about these two teams. The effect Martin St Louis has had on youngster Cole Caufield is evident. With 11 goals and 21 points since the hiring, Caufield has found his form on the Canadien’s top line. Although the Canadiens have had a disaster of a season, their ability to finish has been evident. If they were to have average goaltending they would have exactly 20 more goals than they currently have. That might add a few wins to the column.

Both teams struggle to play a two-way game of hockey. They simply don’t have the offensive firepower to be an offensive team in addition to having pretty bad defence. They dodged a bullet by trading away Ben Chiarot that’s for sure. Ottawa should look to play a strong transition game capitalizing off the rush. The Canadiens have a hard time defending net-front so if they can stick a body or two in front they should have success. With the goaltending Ottawa has been getting lately I see them coming through with a win. The two points would jump them past Buffalo in the standings.

With both teams coming off big wins vs playoff teams this should be a really exciting game. The Predators are a passive physical team whereas the Leafs are a fast skilled team who create off both the rush and forecheck. The Leaf’s first line is killer. That line is operating at almost 4 goals per game. Nashville is a very strong defensive team. The only offence they allow against is from the perimeter of the ice which makes it easy for star goalie Juuse Saros. The Predators are not a shot-heavy team in addition to not being all about quality either.

Which team wins the Central Division? – Powered By PickUp

The key player in this game will be none other than Auston Matthews. Scoring at an insane rate Matthews has the ability to deceive you with his wrists and body movement. Although Nashville doesn’t generate offence as the Leafs do, they finish on most chances they do get. One main area will be zone entries. The Leafs are very good going from transition to entering the zone in a matter of seconds so the Predators will want to clog the zone and be hard on sticks at the blue line. Unlike the Eastern Conference right now, the Western Conference is up in arms, Nashville desperately needs wins so they should come out urgent in this one.

Like the Predators, the Canucks are still in a very tight race for the wildcard spot in the Western Conference. After being shutout by the Red Wings, the Canucks will look to get their offence going once again. At this point, nothing needs to be said about the Calgary Flames. They are a very good choice for Stanley cup pick. After acquiring Calle Jarnkrok they’ve gotten even deeper. JT Miller continues his tear as he collects a whopping 27 points in just 14 games. Vancouver will need to play an almost perfect defensive game to contain the Flames. Luckily Thatcher Demko can help out as he’s had a great season since Bruce Boudreau came in.

The Canucks will look to defend Johnny Gaudreau who’s had a hart trophy calibre season. He can burn you in so many ways. Don’t expect the Canucks to get much going on the powerplay due to Calgary’s ability to defend 5v4. A simple answer to how the Canucks can win. Put three guys on Gaudreau and score. It won’t be that easy. Forechecking will be huge for the Canucks. They should have an advantage playing against their former goaltender in Jacob Markstrom. If the Canucks can disrupt the Flames physically and in both zones, they may have a chance. Due to the insane offensive firepower on Calgary, I see a Flames win in the near future.

Detroit has surprisingly been a very exciting team this year partially due to show-stopping rookie Moritz Seider and Swede Lucas Raymond. The Kraken on the other hand is a pretty boring hockey team. The best story on their team has been the emergence of Jared McCann who although had a good season with Pittsburgh, has turned into a top-line player. Goaltending has been an issue when it comes to both these teams. Specifically, it’s been consistency that has put them below the pack.

Defensively Seattle has been great allowing only 2.12 goals per game. They’ve allowed a total of 150 goals against, third last in the league, this doesn’t add up. Detroit has allowed 148 goals, the fourth last in the league while being the fourth worst defensive team in the league, that adds up. So it all comes down to offence? Yes. Something the Kraken does not have. Their primary location for offence? Where Mark Giordano stands at the blue line. Both teams have finishing issues, Seattle is the worst in the league. If they were to have average finishing they would have exactly 40 more goals, yikes. If Detroit’s young guns are going, Seattle should go down pretty quickly.

Who will win the Atlantic Division in ’21-22? – Powered By PickUp