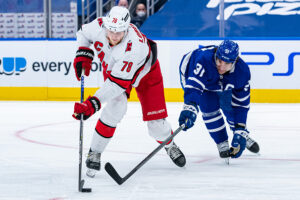 Welcome back to another day of NHL Predictions. Each day, Last Word on Hockey takes a look at the games that are happening and gives our predictions for each one, breaking down head-to-head and other factors that may play in. We also have a featured game of the day, which is considered must-watch TV. Today’s featured game is the Carolina Hurricanes vs Toronto Maple Leafs.

The recent performances of these teams are a premonition of how this game is likely going to go. While they both have a winning record in the last 10 games, the Habs are coming off a loss to the Arizona Coyotes and the Stars are on a three-game skid. The major distinction here is that the Habs continue to be the worst defence in the league. And while the Stars aren’t exactly a prolific offence, Jason Robertson is going to be tough to handle for a porous defence.

Much like the previous matchup prediction, the recent play of these two teams, and the play this season as a whole, is bringing a fair bit of foreshadowing along with it. The Flyers have been quite poor this season, seeing themselves performing in the bottom third of the league in every statistical category but faceoffs. As for the Predators, they have had blips of poor performances, but have been largely quite good.

With the Flyers being the second-worst offence in the league, and Juuse Saros continuing to prove he is a bonafide Vezina Trophy contender, it is hard to see this going any other way than a Preds win. Look for Roman Josi to get on the scoresheet, as per usual.

Something that many did not expect to be said prior to this matchup was that this could have serious implications on the wild card race. Columbus was seen as many to be in a transition year after the departure of John Tortorella, and many predicted them to finish in the bottom 10 in the NHL. This has not been the case this season, as Columbus has seen their offence reinvigorated under Brad Larsen.

For the Capitals, it is more of staying the course than anything this season. They have experienced their fair share of man-games lost, with a decent bit of them being occupied by T.J. Oshie. With the Capitals being relatively healthy at this point, they are a sneakily good team. If the Capitals can improve on the power play, they could be a tough matchup if they are to push their way into the Stanley Cup Playoffs.

With the Blue Jackets coming off a back-to-back, Joonas Korpisalo will very likely stand between the pipes. With how he has been playing this season, and the recent performances from Washington, that should be the deciding factor.

While the battle for New York supremacy was seen prior to this season as a battle of two playoff-bound teams, that hasn’t exactly panned out this year. The Islanders have been the textbook definition of average in nearly every way. As for the Rangers, they have jumped on the back of goaltender Igor Shesterkin, who has found himself well in the discussion for the Vezina Trophy.

With the Islanders struggling to find a way to score and Shesterkin likely getting the nod in this game, look for the Rangers to come out on top.

For the featured matchup of the day, we have the Carolina Hurricanes vs Toronto Maple Leafs. These two teams have produced some exciting games this season, with the respective winner scoring four goals in each meeting. This could very well happen again in this game, as Toronto has been quite average defensively as of late, and the Hurricanes continue to score like the Cup contender they truly are.

Defence is the name of the game in this one. Toronto is securely a middle-of-the-pack team defensively, and their goaltending from Petr Mrazek and Jack Campbell as of late has been less than good. As for Carolina, they are the best defence in the league. Pair that fact with the way Sebastion Aho and Andrei Svechnikov have been playing and you have a recipe for a Hurricanes win.