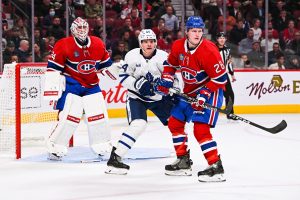 Welcome back to another day of NHL Predictions. Each day, Last Word on Hockey takes a look at the games that are happening and gives our predictions for each one, breaking down head-to-head and other factors that may play in. We also have a featured game of the day, which is considered must-watch TV. Today’s featured game is between the Toronto Maple Leafs and the Montreal Canadiens. Check out our other NHL Predictions for today.

The first of three meetings between these teams features two middle of the pack clubs. The Philadelphia Flyers come into this contest having won eight of their last eleven. But their November struggles have placed them seventh in the Metropolitan Division. Their recent success has come with the production of leading scorer Travis Konecny who has 13 points in nine January games. The Flyers will need continued production from him in this contest.

The Detroit Red Wings are coming off a hard fought 3-2 victory over the Vegas Golden Knights. They return home after a short three game road trip where they play much better. They are 11-9-3 in Detroit, including wins against some top tier teams in the Toronto Maples Leafs, Winnipeg Jets, and Tampa Bay Lightning twice. But overall, last game aside, the last time Detroit won a game when they scored three or less goals was on November 25th.

The Flyers have averaged about 3.5 goals per game since the start of the calendar year. Detroit’s goaltending is not great. Flyers should be able to score four and that has been problematic for the Red Wings.

This is the first of two meetings between the San Jose Sharks and Columbus Blue Jackets. The Sharks, who snapped a three game skid with an impressive comeback victory over the Dallas Stars, are starting a season long eight-game road trip. The road has not been kind to them, going 9-11-2 so far. The resurgence of Erik Karlsson has been fun to watch, but it has not been enough to outscore their issues in net. They have the fourth worst goals allowed average in the league.

The Blue Jackets may not be able to capitalize on that. They struggle mightily to score, ranking 29th in goals per game. At dead last in the standings, it has been a rough year for them. They play marginally better at home though, and if the Shark’s goaltending continues to be below average, this game could be theirs.

The Sharks have not won back-to-back games since December 9th and 13th. They are due. It is also the first game of the trip, so they will be refreshed and ready.

The second of four games between these two teams will again be in Montreal. The first meeting was game one of the season though. Much has changed since then. The Leafs, winners of their last two, are solidly second in the Atlantic Division. The Montreal Canadiens are last in the division. It’s been up and down for Toronto lately. They have lost the last two on the road, one against a top team and one against a middle team. Regardless of the opponent, one thing Toronto can do is score. But they are quietly the third-best defense in the league. The goalie tandem of Ilya Samsonov and Matt Murray has played very well. No matter who gets the nod in this contest, they should feel confident.

The Montreal Canadiens are riding at the bottom of the standings. They are currently in the middle of a five-game home stand which brings very tough competition, including the Leafs. Montreal has won four of their last seven, and second-year Cole Caufield has been much of their recent play. However, Caufield is now out for the season. Three goals in his last five games, and already a career-high 26 on the season, have Montreal fans excited for the future. It has been a revelation, but not necessarily a formula for success. He actually performs worse in wins than he does in losses. Caufield scored two goals in Montreal’s season-opening victory over Tampa.

This is the second and final meeting between these two teams. The Winnipeg Jets are losers of two straight. Those two losses were the first two games of a five-game road trip. They have lost three straight only once this season. They blasted the Senators earlier this season 5-1, so there is reason to believe they will not lose three straight this time around.

The Ottawa Senators as a whole add to that belief. Losers of five of their last seven games, they are certainly struggling. Defensively they are giving up a ton of goals. Even Their two victories they gave up at least three goals. They need to outscore their mistakes, and that will be tough to do against Winnipeg.

Winnipeg ranks 12th in goals for, while Ottawa ranks bottom third in goals against. These teams have identical home and away records, with the Jets 12-10-1 on the road and the Senators the same at home. Tie goes to the runner, or in this case the scorer.