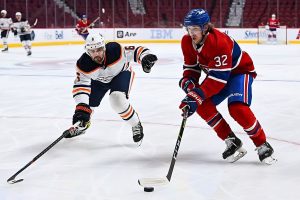 Welcome back to another day of NHL Predictions. Each day, Last Word on Hockey takes a look at the games that are happening and gives our predictions for each one, breaking down head-to-head and other factors that may play in. We also have a featured game of the day, which is considered must-watch TV. Today’s featured game is between the Montreal Canadiens and the Edmonton Oilers.

The low-flying Anaheim Ducks continue their road trip against the Minnesota Wild. Minnesota is coming off a 5-3 victory, whereas Anaheim got slaughtered 5-0 in their last defeat.

Anaheim may not have the best record, but they have good players to want to watch. Trevor Zegras and Troy Terry are the ones to watch for leading the charge upfront. Kirill Kaprizov has brought electrifying hockey back to Minnesota and is always a treat to watch as he leads the team with 30 points.

With the Ducks allowing five goals in three of their last four defeats, a high-scoring affair appears to be on tap for the Wild.

This game is not the featured game on tonight’s NHL Predictions, but it will be one of the better games on tap. The defending Stanley Cup Champions Colorado Avalanche travel to take on the Boston Bruins. Both are some of the best teams this league offers, and the stars will shine brightly.

So much to enjoy with this one, especially up front. Nathan MacKinnon, Mikko Rantanen, David Pastrnak, and Patrice Bergeron are just a few. Both teams have deep blue lines highlighted by Cale Makar, Devon Toews, Samuel Girard, Charlie McAvoy and Hampus Lindholm. Just a treat for hockey fans everywhere.

Both teams are capable of scoring goals at a high rate. A huge key to look for in this game will be special teams’ play. The top-ranked powerplay with Colorado takes on the third-best penalty kill unit in Boston. Boston is no slouch on the power play either (ranked 2nd in the league). A great test for both teams in what could be a preview of a Stanley Cup Final matchup.

An old-school rivalry kicks back off again in tonight’s NHL Predictions. The New Jersey Devils take on the Philadelphia Flyers for the second time this season. Philadelphia took the opening meeting in a 5-2 victory and a stellar performance from Carter Hart.

Ever since that first meeting, a lot has happened, and both teams are trending in opposite directions. New Jersey sits first in the Metropolitan Division and the league, whereas the Flyers have not been flying high. They lost ten games in a row before winning their next game. New Jersey had its legendary win streak snapped and is coming off a stunning overtime loss to the Nashville Predators. The Devils are light-years better than the Flyers and will bounce back.

Even though time has passed, it will be a story until the day he retires or moved on. Erik Karlsson and the San Jose Sharks continue the road trip against the Ottawa Senators. Ottawa is 2-3 in its last five and will be entering the second game of a back-to-back situation. San Jose has gone 1-2 on their Canada road trip.

Karlsson is a bright spot to watch. He is having a stellar campaign and is at the top of the list to win the Norris Trophy. On deck for him and the defence is a youthful attack led by Brady Tkachuk, Tim Stuetzle, and Claude Giroux. These teams are not must-watch hockey, but there is enough talent to warrant tuning in.

Tonight’s featured game on the NHL Predictions is a Canadian matchup. The Montreal Canadiens take on the Edmonton Oilers. Edmonton currently sits fourth in the competitive Pacific Division, whereas the Canadiens are at the bottom of the Atlantic Division.

As both teams enter play, each possesses dangerous threats in their offensive attacks. The dynamic duo of Connor McDavid and Leon Draisaitl do it all. They are clutch and there is a reason they are at the top of the league in points. The duo traded off odd-man rush goals where they sauced the puck to each other. On the other end, a trio has clicked on all cylinders and has been a treat for Habs fans everywhere. Cole Caufield, Nick Suzuki, and Kirby Dach have been their best line. Since being put together, they have scored 13 goals.

In addition to five-on-five play, special teams have been a key part of each team. Edmonton has the fifth-best power play in the league, whereas Montreal has the sixth-best penalty kill.