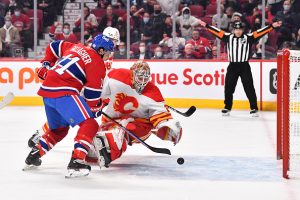 Welcome back to another day of NHL Predictions. Each day, Last Word on Hockey takes a look at the games that are happening and gives our predictions for each one, breaking down head-to-head and other factors that may play in. We also have a featured game of the day, which is considered must-watch TV. Today’s featured game is the Montreal Canadiens vs the Calgary Flames.

Although this game looks to be a blowout for the Florida Panthers, they haven’t been as good lately. They currently hold a 3-4-3 record in their last ten and have a 10-9-4 record overall. They seem to be getting a lot of their offense from the recently acquired forward Matthew Tkachuk who has 29 points in 21 games, and from Brandon Montour, who is just shy of a point per game with 20. Their goaltending has been rocky though, with Bobrovsky holding a .878 SV% and a 3.84 GAA.

Although the Vancouver Canucks have been bad, things have taken a bit of an upswing for them. They currently have a 5-5-0 record in their last ten and sit at 9-11-3. Although the entire season has been a disaster for the Canucks, they are starting to get their offensive swing again from Elias Pettersson, who has 27 points in 23 games, and Bo Horvat and J.T. Miller, who both have 24 points. Overall, this should be a pretty close matchup, but there is a thought of the Canucks one-upping Florida on their Hall of Famers night.

Considering this is the first matchup between these two teams all year, this matchup should be an interesting one to watch. The Washington Capitals haven’t been great this year at all. Washington’s goaltending had suffered after getting rid of both Ilya Samsonov, and Vitek Vanecek. In what is looking to be a record-setting year for Alex Ovechkin, the rest of the team hasn’t performed under him, with the next-highest point total being only 18.

The Seattle Kraken on the other hand has been the polar opposite. While rookie Shane Wright hasn’t found his footing yet, the rest of the team has adopted Hakstol’s system and is playing really well in year 2. So far, the Kraken have a 14-5-3 record, and only seem to be improving, as they are 8-1-1 in their last 10. Overall, this should be a good game for the Kraken.

Although there usually is some justification as to why the Arizona Coyotes have a chance at winning this game, it’s not looking too good for them. The Los Angeles Kings sit third in the west with a 12-9-4 record, sitting behind two 30-plus point teams in the Kraken, and the Vegas Golden Knights.

So far, Kevin Fiala has been more than impressive for Los Angeles, notching 26 points in 25 games. Also, more than half of the Kings roster currently sits at an impressive 18 points. In terms of Arizona, they’ve been alright recently. They’re 5-5-0 in their last ten and aren’t going through an absolute mudslide, although this isn’t going to be an easy game for them

For our NHL predictions featured matchup, let’s look at Canadiens against Flames. This is the first time the two rivals meet head to head this season, in a battle reminiscent of the 1989 Stanley Cup Finals. Neither team has been fantastic this year. Calgary currently sits with a 10-9-3 record in the west, sitting fifth in the Pacific. The Canadiens on the other hand have been impressive considering how bad they were last year. They currently sit sixth in the Atlantic, with a 6-4-0 record in their last 10 games, and an 11-10-1 record.