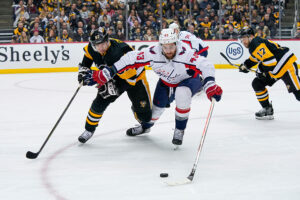 Welcome back to another day of NHL Predictions. Each day, Last Word on Hockey takes a look at the games that are happening and gives our predictions for each one, breaking down head-to-head and other factors that may play in. We also have a featured game of the day, which is considered must-watch TV. Today’s featured game is the Washington Capitals vs Pittsburgh Penguins.

Dallas topped the Devils back in January, and want to sweep the season series tonight. They enter with more to play for, too. The wild card race continues heating up out west, where the Stars hold some games in hand. If they get into the postseason, it likely means the Nashville Predators or Vegas Golden Knights fell out. Those teams should battle hard down the stretch, so a victory over a non-playoff Devils team feels like a must-win.

New Jersey wants to build for next season, though, and definitely won’t give this one away for free. That becomes more difficult with Jack Hughes out for the season, but that absence could provide an opportunity for others to step up. Without much else to play for, the individuals on the team should be approaching each game as a sort-of tryout for next season.

Never in league history has a team won five different games in which they trailed by three or more goals. Well, never until the Panthers did it this year. Last week saw the team climb back from four-goal deficits, TWICE. The Panthers are at a point now where trailing 3-0 in the first period feels like they’re winning.

Now, Nashville already topped Florida back in February. That game happened in Florida and remains one of only six regulation home losses the Cats have had this season. The Preds sit right in the middle of the playoff race, jockeying for a spot with a glut of teams. They need the two points badly here, and their play should reflect that.

At the end of the day, however, no one can slow Florida’s scoring prowess. They set their franchise record for goals scored in a season and did it with more than a dozen games left to be played. This team is red hot and as dangerous as it gets in the NHL right now.

In probably the billionth game between these two Original Six rivals, the Leafs enter as heavy favourites. The Habs play harder and better overall with Martin St. Louis behind the bench, without a doubt. However, Toronto remains in their prime as a team with their eyes set on winning a Stanley Cup. Whether that will happen remains to be seen, as they’ll need to escape the first round eventually for that to happen.

Auston Matthews might reach the 60-goal plateau this year. Mitch Marner could reach 100 points. Can either of them produce more than one combined goal though this postseason? It just feels silly analyzing how great these guys are in the regular season year after year when they have literally no playoff success to stand on.

And, certainly, the Habs fans will let them hear it tonight, win or lose.

Not many implications exist for this game. Both clubs rest well outside the playoff conversation, but also not at the very bottom of the standings. In fact, they could very well finish as the best teams out east to miss the postseason.

If that was floated to either team as a possible silver lining, players would scoff. There is no glory in falling short. Detroit fans retain optimism going forward, buoyed by their young stars. Moritz Seider and Lucas Raymond typically rank first and second, respectively, in mock votes for the Calder Trophy. If they get better goaltending next year from Alex Nedeljkovic, which feels very likely, Detroit could push for the postseason. Columbus might still be further off, though also might be the better team today. They just don’t look to be on the same trajectory as their opponent tonight, beyond this season.

The Rangers blew expectations out of the water this season, and sit squarely within the playoff picture out east. They still hold a real shot at winning the Metropolitan Division. Games against clubs like the Senators are must-wins if the division title remains a goal for the Rags.

Igor Shesterkin sits atop the league with a .933 save percentage as of this writing. His performance exceeds that of not only goalies but most players too. As a result, the netminder’s name floats around the Hart Trophy discussion. If a goalie wins the Hart this year as the league MVP, it’ll be Shesterkin without a doubt.

Ah yes, the matchup that keeps on giving. Who knows how many more “Sid vs Ovi” battles we’ll be treated to, but one thing’s for certain: these two haven’t skipped a beat.

Both teams will earn berths in the postseason, but seeding remains to be decided. The Caps want to climb up and out of a wild card spot to avoid a dangerous matchup against either Carolina or Florida in round one. Pittsburgh sits just ahead of them and wants to hold their seat for the same reasons. Regardless of the point jockeying, a Washington Capitals vs Pittsburgh Penguins game is always worth watching.