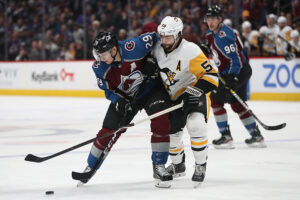 Welcome back to another day of NHL Predictions. Each day, Last Word on Hockey takes a look at the games that are happening and gives our predictions for each one, breaking down head-to-head and other factors that may play in. We also have a featured game of the day, which is considered must-watch TV. Today’s featured game is the Pittsburgh Penguins vs Colorado Avalanche.

It’s the rubber match between the two teams in the season series. Florida picked up the win in the last game over New Jersey, 4-1. The Cats have wins in four of their last five and have scored at least four in all of these victories. Sergei Bobrovsky is confirmed to get the start in this one.

New Jersey is just playing out the string and likely goes with Nico Daws in net. The Devils do have wins in three of the last five, but are coming off an 8-1 pasting by the Boston Bruins last time out.

The over/under of seven is a tough number, so maybe stay away from that unless you feel confident. Florida should make life hard on a struggling New Jersey defence.

It’s the first of two meetings in four days between the two teams in our feature game. The Pens have lost three of their last five, but are coming off a 4-3 win over the Minnesota Wild. Pittsburgh is also three games removed from an 11-2 drubbing of the Detroit Red Wings. Tristan Jarry likely gets the start in between the pipes.

Colorado likely rolls with Darcy Kuemper in net and has won three of its last four. The Avs beat the San Jose Sharks and Calgary Flames in consecutive games. Mikko Rantanen is trying to make a push for 40 goals as he’s got 34.

Both teams are top 10 in goals scored and goals against. We’ll go Colorado due to their home record.

It’s the first of a home-and-home set between the two teams to wrap the season series. Boston got a 5-4 shootout victory in the first meeting between the two teams. Elvis Merzlikins probably starts thanks to the Joonas Korpisalo injury. The Jackets have lost five straight and want to stop the bleeding with a positive result.

Linus Ullmark likely starts this game for the Bruins, who are victors in four of the last five. Boston’s Production line of Brad Marchand, Patrice Bergeron and David Pastrnak ran roughshod over New Jersey in that one. The Bruins have been surging since the trade deadline.

Columbus has the 30th best goals against and Boston is scoring for fun lately. The over of 6.5 and the win should be reachable.

It’s the final rematch of last year’s Stanley Cup Final, but both teams are on opposite ends of the spectrum. The Habs are closer to landing Shane Wright and were the first team officially eliminated. Jake Allen probably starts for Montreal in this one, but the Habs have been better under Martin St. Louis, who comes home for this one. Cole Caufield continues to be a strong play in daily fantasy and playoffs.

Tampa Bay is turning it on at the right time and has won four in a row. Steven Stamkos leads the club with 31 goals and Victor Hedman tops the team’s assists with 45. Brian Elliott is the likely starter to give Andrei Vasilevskiy a night off.

Montreal has been a tough out, so suspect a closer game than most think.

Our final game features the Leafs trying to keep pace in the Atlantic Division and golden chance to do so. Jack Campbell is the confirmed starter and is looking to replicate his 36-save shutout in the 3-0 Leafs’ win earlier in the season. Toronto has won three straight and scored at least five in those victories.

Carter Hart has the tough task of dealing with a red-hot Toronto offence. Philadelphia is 30th in goals for and 24th in goals against. The big news is that Keith Yandle and his ironman streak of 989 games is over after coach Mike Yeo scratched him.

Toronto should have offence and Campbell wants to knock some rust off in this game.