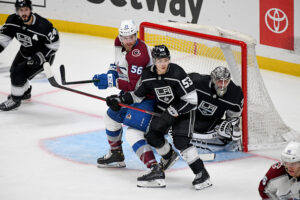 Welcome back to another day of NHL Predictions. Each day, Last Word on Hockey takes a look at the games that are happening and gives our predictions for each one, breaking down head-to-head and other factors that may play in. We also have a featured game of the day, which is considered must-watch TV. Today’s featured game is the Los Angeles Kings vs Colorado Avalanche.

This game should be as straightforward as everyone thinks it will be. The Flyers have been quite poor this season, to put it lightly, and they are coming off the heels of an embarrassing loss to the Washington Capitals yesterday.

The biggest factor in this one is that Igor Shesterkin likely won’t be in the net, as he got the start in the game yesterday against the Carolina Hurricanes. Even with Alexandar Georgiev in net, the lowly Flyers offence will still likely find it very difficult to get anything positive out of this game.

In the third and final meeting between these two teams this season, the Blue Jackets look to pull off the season sweep. While this would seem a simple feat, neither of these teams have been good as of late, with neither of them anywhere near the .500 mark in their last 10 games respectively.

With that being said, the goaltending for the Canadiens has been nothing short of porous this season, with their defensive corps not offering much in the way of assistance. On the other end of the ice, however, is an almost equally as poor defensive squad this season. In what was once a very defensively sound team, the Blue Jackets have found them letting in goals at an alarming rate this season, leaving Elvis Merzlikins to carry the entirety of the weight of the team on his back.

This game is a tough one to pick, as either team could let in a slurry of shots and goals. The goaltending quality pushes the needle in favour of Columbus. For that, it likely means they will come away with the win.

For the featured matchup of the day, we have the Los Angeles Kings vs Colorado Avalanche. This game features one of the surprise teams of the season in the Kings against arguably the best team in the Western Conference and one of the best in the NHL currently in the Avalanche.

The Kings are a surprise to many. Many expected them to finish in the middle of the pack in what is not exactly a strong Pacific Division. That has obviously not been the case, as the Kings have seen reliable goaltending from Jonathan Quick and Calvin Petersen to back up some balanced scoring that has featured a pseudo-revival season from Anze Kopitar.

As for the Avalanche, there are plenty of names you could list as the reason for their success. The fact that Darcy Kuemper has found his footing after a shaky start has made a major impact. On top of that, they have five players at or above a point-per-game pace this season. A truly amazing feat in itself.

While the Kings are deserving of their fair share of credit, this one should go to the Avalanche. Look for Mikko Rantanen and Nathan MacKinnon to continue their blazing hot streaks.