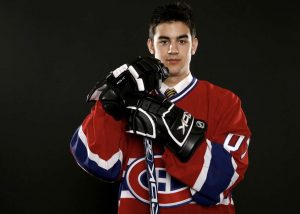 Player development seems to always result in more questions than answers. How likely is it for a top pick to pan out? What makes a player a “steal”? Last Word On Hockey will be starting a new series on how to properly develop prospects from all different spots throughout the draft. This week’s piece involves draft picks in the back half of the first round and how they were used early in their careers.

There were 12 forwards who fell into the fourth category, “rushed,” on the list. Of those 12 players, two made their NHL impacts in their DY+2 season or sooner. Those players are David Perron and Max Pacioretty.

Perron, drafted 26th overall in the 2007 NHL draft by the St. Louis Blues, came out of the Lewiston MAINEiacs organization of the QMJHL. Prior to joining the QMJHL, Perron played for the Saint-Jerome Panthers of the QJAAAHL in his DY-1 season. There, he scored 24 goals and 45 assists for 69 points in 52 games, for 1.327 points per game. That was good for 15th among the 84 forwards in DY-1 production. Albeit, he played in a weaker league than most. He followed that up in his DY with 39 goals and 44 assists for 83 points in 70 games with the MAINEiacs, for 1.186 points per game. That ranked 40th out of the 84 forwards in DY production. Perron would immediately see the NHL the following season with the Blues.

How Was Perron Used?

Following that excellent season, Perron would play 81 games in his second season. In those 81 games, he would average 14:32 per game, almost a full two minutes more per game from his rookie season. With the increased role, he scored 15 goals and 35 assists for 50 points. His analytics would remain solid, though they all took a hit. His EVO (7.0) and EVD (1.0) saw the biggest drops of the four metrics looked at. Meanwhile, his WAR (2.0) and GAR (11.2) dropped ever-so-slightly. But again, his season was very strong yet again.

Following that third season, in 2009-10, Perron would play three more seasons with the Blues. In total, he played 115 more games with the team that drafted him, recording 36 goals and 38 assists for 74 points in that span. The following season, in 2013-14, he joined the Edmonton Oilers, where he stayed for one and a half seasons. In that time, he scored 33 goals and 43 assists for 76 points in 116 games with them. He wound up getting traded mid-way through his second season with the Oilers, to the Pittsburgh Penguins, in 2014-15.

Where Is Perron Now?

The following season, he joined the Vegas Golden Knights for one year, where he scored 16 goals and 50 assists for 66 points in 70 games, his best single-season point production to this point in his career. With that production, he signed a new deal with the Blues once again, where he has played the last four seasons. In those four seasons, Perron has scored 94 goals and 127 assists for 221 points in 251 games. It’s safe to say Perron’s NHL player development went very well. Overall, Perron has become a solid top-six option for every team he has played for in his career. Though he has never been an elite point producer, with his career-high at 66 points, he has still carved out a very strong career for himself. Consistently getting a raise in ice time in his first three seasons certainly helped build him up for his career role.

Following getting drafted by Montreal, Pacioretty would head to the NCAA to play for the University of Michigan. There, he scored 15 goals and 24 assists for 39 points in 37 games, for 1.054 points per game. That ranked 42nd out of the 82 forwards still outside the NHL in their DY+1 seasons. After that lone season in the NCAA, Pacioretty would head to the Canadiens to play in the NHL.

How Was Pacioretty Used

In his first professional season, Pacioretty would split between the NHL and AHL. At the AHL level, Pacioretty scored six goals and 23 assists for 29 points in 37 games played. Meanwhile, at the NHL level, he played 34 games and averaged 12:37 per game. In that role, he scored three goals and eight assists for 11 points, a modest production. Analytically, Pacioretty displayed that his decent production was reflected in all-around solid play. His EVO (1.4) was okay, while his EVD (0.6) was very solid for a rookie. With his decent even-strength metrics, his WAR (0.6) and GAR (3.6) were also decent.

After a good but not great rookie season, Pacioretty would split his second season between the NHL and AHL once again. In the AHL, he scored two goals and nine assists for 11 points in 16 games. Meanwhile, he would see more NHL games, playing 52 games, and averaging slightly more ice time, at 12:43 per game. He went on to score three goals and 11 assists for 14 points. That’s a step back from the year prior, production-wise. His analytics reflected that offensive regression. His EVO (-2.3) dropped well-below replacement level, pointing towards the issue in production. While his EVD (2.3) improved in a big way, that offensive regression hurt his WAR (0.5) and GAR (2.6) by a bit.

In his third professional season, Pacioretty would once again split between the NHL and AHL. With his poor second year offensively, Pacioretty would see less time in the NHL and more time in the AHL. At the AHL level, he played 27 games and scored 17 goals and 15 assists for 32 points, his best AHL season to this point. Meanwhile, in the NHL, he played 37 games while averaging a new career-high ice time of 15:54 per game. In that larger role, Pacioretty scored 14 goals and 10 assists for 24 points, a big step up from the year prior. His analytics once again reflected that. Pacioretty’s EVO (3.0) was a vast improvement from his second year, while his EVD (-0.1) dropped below replacement level for the first time. Despite the defensive regression, the offensive improvement led his WAR (1.2) and GAR (6.6) to vastly improve.
Embed from Getty Imageswindow.gie=window.gie||function(c){(gie.q=gie.q||[]).push(c)};gie(function(){gie.widgets.load({id:’WaXPVk7mSiR9VCl71ommqQ’,sig:’ta52Gr-tsvqysiyXxppjniopkaQx78oOoy6zhHEttVE=’,w:’594px’,h:’396px’,items:’883535510′,caption: true ,tld:’com’,is360: false })});

This is why they call it the Madhouse! Patrick Kane scores on the power play & Chicago and Anaheim are all tied at 4. pic.twitter.com/1mW5k3r8Zt