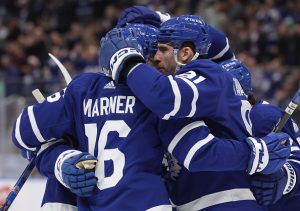 Welcome back to our first quarter analysis. Each day, we work through every division in the NHL. Today is Part Two of our NHL Atlantic Division recap. Part one can be found here.

The Montreal Canadiens have played better than expected, playing themselves right out of the Connor Bedard draft lottery sweepstakes. The Canadiens were 5-4-0 in October and followed that up by going 6-6-1 in November. Coming into the season, many had pegged Montreal to be at the bottom of the standings, not just in the NHL Atlantic Division but across the league. The Hockey News ranked Montreal 30th in their pre-season power rankings.

Unless your name is Cole Caufield or Nick Suzuki, goals have been hard to come by for Montreal. The Canadiens average 2.86 goals per game, which ranks 27th in the league. Caulfield and Suzuki have combined for 30 goals, while the rest of the roster has combined for 50 goals. The two young stars have scored 37.5% of Montreal goals, indicating that they still lack the secondary scoring to complement their top line. Montreal has also struggled mightily on the powerplay. Their 14.4% powerplay ranks last in the league. The Canadiens scored 18 goals on the powerplay, with eight coming off the stick of either Caulfield or Suzuki.

Montreal is putting themselves into a challenging position as their record has them sitting well ahead of the bottom-dwelling teams in the standings but not in a place where they will make the playoffs. They look like a team that won’t be among the favourites to win this year’s draft lottery. Instead, they appear to be a bubble team that won’t quite qualify for the playoffs barring a miracle.

The Ottawa Senators had big hopes for this season as the front office and fans felt this season could mark the end of the rebuild status and the start of some considerable progress in the NHL Atlantic Division standings. Instead, the Senators have once again found themselves in the cellar of the Atlantic Division and seem locked in a battle for last with the Buffalo Sabres.

The Senators had a tremendous offseason this summer, landing veteran free agent Claude Giroux and acquiring potential 40 goals scorer Alex DeBrincat. The moves made Ottawa seem poised to climb up the NHL Atlantic Division Standings, but the results just haven’t been there. However, Giroux and DeBrincat shouldn’t have the finger pointed at them individually, as they are both supplying the team with the type of offence expected from them. Giroux has posted 12 goals and 14 assists for 26 points in 28 games. DeBrincat has nine goals and 15 assists for 24 points in 28 games.

Ottawa also acquired goaltender Cam Talbot over the offseason. Talbot missed the beginning of the season due to injury but, since returning, has posted a 6-7-0 record for Ottawa and has a 2.55 GAA and a .917 SV%

The Senators’ recent stretch of games has shown some improvement; however, this will not be a year where Ottawa competes to get back into playoff action. Instead, Ottawa will finish among the bottom three in the NHL Atlantic Division and have the potential to add another vital piece through next summer’s NHL draft.

The Tampa Lightning have finally been showing signs of regressions after years of dominating play in the NHL Atlantic Division. Tampa Bay got off to a sluggish start this season, going just 5-4-0 in October. But, overall, Tampa Bay has picked up their game and is 7-3-0 over their last ten games.

The effects of the salary cap crunch are finally catching up with the perennial Stanley Cup contenders as this offseason’s losses of Ondrej Palat and Ryan McDonagh have stung. With every passing season, the Lightning have seen more and more players departing to be cap compliant. Tyler Johnson, Blake Coleman, Barclay Goodrow and Yannie Gourde are other players who’ve been forced to leave as Tampa Bay tries to build on fly-around their core guys. While Tampa Bay GM Julien Brisebois has done a great job filling the voids, the effects of these players leaving still have taken its toll on the franchise.

Early in the season, Andrei Vasilevskiy, one of the best goalies on the planet, struggled to find his elite level of play. Vasilevskiy has an 11-8-1 record this season and a sub-par goals-against average of 2.66. Vasilevskiy has been an absolute workhorse for the Lightning playing in three straight Stanley Cup Finals may have caught up to the goaltender. Despite his early struggle, Vasilevskiy has put together a solid stretch of play of late as he looks to be returning to form.

The Lightning are destined to clinch another playoff spot out of the Atlantic Division; however, don’t expect it to be by a landslide as the improved Detroit Red Wings continue to push towards their return to post-season action. The Florida Panthers will also be hot on the Lightning’s heels as the season progresses.

The Toronto Maple Leafs are off to a terrific start through the season’s first quarter. The Maple Leafs sit firmly in second place in the NHL Atlantic Division. The Leafs sit just three points behind the Bruins and handed Boston one of their five losses this season. They are 9-0-1 in their last ten games. For Leaf Nation, the time is now.

Considerable Improvement Between the Pipes

After opting not to re-sign Jack Campbell during the offseason, Toronto brought in an entirely new tandem, signing Ilya Samsonov to a one-year, $1.8 million contract and acquired Matt Murray via trade. Murray has been playing exceptional hockey since returning from an early-season injury. Murray has a 7-1-2 record with a 2.50 GAA and a .926 SV%, his best numbers since his rookie season, where he helped guide the Pittsburgh Penguins to a Stanley Cup Championship.

The other half of Toronto’s tandem, Samsonov, has played even better with a 9-2-0 record, a sparkling 1.70 GAA, and .939 SV%. The solidified goaltending mixed with the high firepower of Toronto’s offence is an excellent recipe for success.

The Leafs’ “big four,” Mitch Marner, Auston Matthews, William Nylander and John Tavares, each are having outstanding seasons leading Toronto’s lethal offence. At the time of writing this, Marner has a 23-game point streak intact which is a franchise record. Perhaps quietly, Nylander is leading the Leafs with 17 goals. Last season’s Hart and Rocket Richard trophy winner, Matthews, sits second with 15 goals. Finally, Captain Tavares is on pace for 38 goals this season which would be the most since he scored a career-high 47 in 2018-19.

Toronto fans have plenty of reason to be excited about this year’s team. If their goaltending can stay consistent to the elite levels that they are demonstrating, there’s no doubt that this will be the year Toronto buries their playoff woes and makes it past the first round.