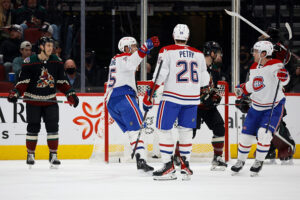 Three Montreal Canadiens are dealing with injuries in announcements made earlier this afternoon. Jeff Petry, Brendan Gallagher and Jonathan Drouin are all out for the Habs according to head coach Martin St. Louis.

Montreal Canadiens defenceman Jeff Petry is out indefinitely with a lower-body injury.https://t.co/7AUUt5g4c0

Petry is out indefinitely with a lower-body injury. He left the previous game with the Florida Panthers due to an undisclosed issue. The 34-year-old has four goals and 12 assists in 57 games with Montreal this season. Petry has a Corsi for of 47.4 and a relative Corsi of -0.4. He was drafted in the second round, 45th overall by the Edmonton Oilers in the 2006 NHL Draft.

Petry joins Drouin and Gallagher on the shelf for the big showdown against the rival Toronto Maple Leafs. Drouin is also out indefinitely with an upper-body injury. He was also put in precautionary isolation after coming into close contact with someone that has COVID-19. This is the second time Drouin has dealt with an upper-body injury earlier this season. He played two games before sitting out against the Panthers.

Gallagher will be out at least a week after suffering a lower-body injury. He’s been injured since Montreal’s 4-3 overtime loss to the Dallas Stars on March 17. He has five goals and nine assists for 14 points in 43 games this season.

Petry’s absence hurts the Montreal defence, but help is on the way. Kale Clague did practice on Saturday morning and could be in the lineup for Saturday night’s game. The newly acquired Justin Barron could also be in the lineup for the Habs. Montreal also signed Northeastern’s Jordan Harris after the Huskies were eliminated from the NCAA tournament.

It’s been a trying season for the Canadiens, but there have been bright spots with Cole Caufield‘s recent surge since St. Louis took over. Montreal has been a tough out in recent games, but things will be hard with three quality players out of the lineup.