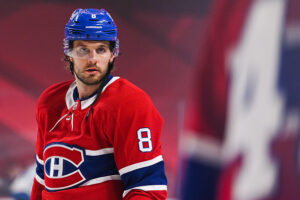 One of the most talked-about players this trade deadline is off the market as Ben Chiarot is finally dealt. The Montreal Canadiens have traded Chiarot to the Florida Panthers. The Canadiens are getting back Ty Smilanic, the Panthers 2023 first-round pick and their 2022 fourth-round pick. The Canadiens retain 50% of Chiarot’s salary and cap hit.

The Canadiens have traded defenseman Ben Chiarot to the Florida Panthers in exchange for Tyler Smilanic, a 1st-round pick in 2023, and a 4th-round pick in 2022.#GoHabsGo https://t.co/dD9btbcaEQ

The Montreal Canadiens went into the 2021-22 season with high hopes. The season disagreed. It has been a disastrous one for the Habs, resulting in a fired general manager and head coach. Soon, all eyes were turned to any potential trade chips the team had. At the top of many lists sat the big veteran defenceman teams often look for going into the playoffs.

The Canadiens are a team wracked by injuries all season long, and Chiarot was unable to avoid the injured reserve list. He was placed there on February 13th, a day after playing nearly 23 minutes against the Columbus Blue Jackets. He has since returned to the lineup and has nine points in his last ten games for the Habs. And that says as much as anything about why the Florida Panthers traded for him.

Injuries to other players have forced him into extra power-play time this year, but in a normal season, he’s a defensive minute-muncher. Chiarot led all Canadiens skaters in ice time this season after being third in the previous two. The 6’3″ 234 lb. defender can play either side of the ice. He has limited offensive skill, breaking the 20 point mark twice in eight seasons. His real skill lies in being a crease-clearer and helping his goalie see incoming shots.

Smilanic was taken by the Panthers with the 74th overall pick in the 2020 NHL Draft. He has 13 goals and 22 points in 38 games in his second season with Quinnipiac University. Smilanic was also part of the US team at the World Juniors. Ben Kerr named him the Panthers #8 prospect this summer, saying (in part):

“Smilanic combines his strong skating with good puckhandling skills. He can challenge defenders and take them wide and get to the net. When they back off to respect his speed, he can use the space created to shoot the puck on the net or make a quick pass through an open lane to set up a teammate. He has a very good wrist shot and a quick release. It is powerful and accurate and his quick hands can change the angle just before shooting, fooling goaltenders. His snapshot, slap shot, and one-timer are also effective. Smilanic needs to do a bit more to get open when he doesn’t have the puck though. This will give his teammates more of an opportunity to set him up.”

Chiarot is almost a luxury item at this point. He isn’t being brought in to ignite any scoring or dazzle with his skate work. What he does is solidify an already well-established defence with his size and endurance. Do the Panthers absolutely need Chiarot? Probably not. But preparing for the Stanley Cup Playoffs is all about putting questions to rest, and the trade deadline is a general manager’s last chance to do that. Ben Chiarot is here to clean up messes, calm teammates down, and make opposing players regret their career choice.

Unless a new deal is negotiated, Chiarot is an unrestricted free agent at the end of the year.