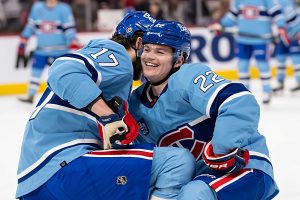 The Montreal Canadiens announced Saturday morning that star sniper Cole Caufield will miss the remainder of the 2022-23 season with a right shoulder injury. In a corresponding transaction, forward Jonathan Drouin was also placed on injured reserve retroactive to January 16.

Caufield will not suit up again in 2022-23 due to the shoulder injury, which will require surgery. The Canadiens will issue a recovery timeline for Caufield after he completes his medical procedure.

It’s a shame to see the season end so prematurely for Caufield, who has been spectacular in his sophomore campaign.

The 22-year-old averaged over 18 minutes per game for Montreal. He led them in goal-scoring by a country mile with his career-high mark of 26, as well. Linemate Nick Suzuki is second on the team, trailing him by ten.

His final 2022-23 stats will read 26 goals, ten assists, 36 points, 158 shots on goal, and just two penalty minutes in 46 games. Even with his injury, Caufield should remain a serious candidate for the Lady Byng Trophy at the end of the season.

On pace for 46 goals in a full season on a non-playoff team, Canadiens fans have plenty to be excited about for Caufield’s future. His only substandard metric has been his defensive impact, which is to be expected for a young player tasked with carrying the offensive load on a struggling team.

If the playoffs weren’t already out of the picture for Montreal, however, they are now. Injuries continue to pile up for the Habs, who already have Brendan Gallagher, Jake Evans, Juraj Slafkovsky, Joel Armia, Kaiden Guhle, Sean Monahan, Paul Byron, and the de facto-retired Carey Price on injured reserve.

An injury at this point in the season, however, gives Caufield plenty of rest time over the offseason to fully recover from the injury. Montreal is expected to once again end up with a high pick in a very talented 2023 draft class. They could come back next season with an even more impressive corps of under-23 players.

The team is still in the process of trying to work out an extension for Caufield as well. He enters the offseason as a restricted free agent. With his season over early, Caufield’s camp can now fully focus on signing a long-term extension with Montreal.

The post Montreal Canadiens Star Sniper Out for Rest of Season appeared first on Last Word On Hockey.