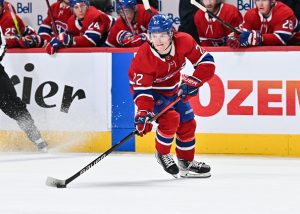 Today’s NHL Rumours are looking at Cole Caufield. The young Montreal Canadiens star is set to start getting proposals for an extension soon. His entry-level contract is coming to an end and the team is wasting no time getting an extension ready for the 2019 first-round draft pick.

-The #GoHabsGo will have options at the next trade deadline.
-A Cole Caufield extension shouldn’t be too far down the line.
-More NHL trade rumours and newshttps://t.co/idvOcRPi92

NHL Rumours: Cole Caufield Could Be Getting An Extension In Near Future

Rumour: According to Marco D’Amico on MontrealHockeyNow, a contract extension for Cole Caufield may happen ‘sooner rather than later.

Cole Caufield took a major step under new head coach and NHL alumni Martin St. Louis, and he will likely be rewarded for it with a contract extension. It is expected to be in and around a multi-year, $6.5 million extension, although it’s not a certainty yet. Caufield has had a rollercoaster of a start to his professional hockey career, and it has shown. He won gold at the World Junior Championships, made the Stanley Cup finals, has been in the AHL and has been on the last place team in the league all within two seasons.

What This Means For The Future

As expected, the new regime in control of the Canadiens is smart at who they are keeping around. They re-upped Michael Pezzetta and Rem Pitlick on team-friendly deals and signed Nick Suzuki to a deal below 8 million dollars. Now, they’ll likely try and work with Caufield to sign a good deal for both sides.

Caufield right now is part of a potentially lethal three-way punch with Juraj Slafkovsky, and Nick Suzuki. And, so far, they’re all showing a lot of promise. Although the Habs suck, Caufield is a bright spot in an otherwise bleak period in Montreal history. The team needed to go on a downfall in order to start over and move on from the old regime.

The post Montreal Canadiens Star Could Get Extension appeared first on Last Word On Hockey.