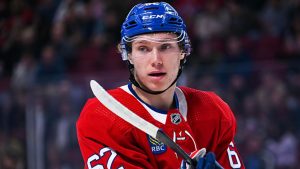 The Montreal Canadiens have signed centre Owen Beck to a three year entry level deal with the club, after an extremely impressive 2023 training camp.

The Canadiens have agreed to terms on a three-year, entry-level contract (2022-23 to 2024-25) with forward Owen Beck.#GoHabsGo https://t.co/d0PZAHWDHU

The Montreal Canadiens have inked another prospect, signing centre Owen Beck to a three year entry level contract. The 33rd overall pick in the 2022 NHL Draft has had a very impressive rookie camp so far, stealing the spotlight away from the 1st overall pick Juraj Slafkovsky.

Beck spent all of last season with the OHL’s Mississauga Steelheads, recording 51 points in 68 regular season games. He recorded six points in 10 playoff games with the Steelheads, as they finished 4th in the eastern conference and made it to the second round where they were swept by the eventual Memorial Cup finalist Hamilton Bulldogs.

although Beck has impressed the Canadiens, it’s doubtful that he will actually play this season, and will most likely either return to the Steelheads, or start his professional career with the AHL’s Laval Rocket.

He has been very impressive, and has really shown off his skills, but the Canadiens don’t want to make the same mistakes from the past and rush him to the NHL because of an impressive training camp.

If he does return to the Steelheads, he returns to a team which is currently last in the Eastern Conference with a 1-1-0 record. Although, it is very early in the season, so it is unknown how well they will do in the long run.

If he makes the jump to Laval, he joins an already talented Rocket team who made it to the Eastern Conference final last year. In the AHL, he can grow and develop as a player, and show his skills before making the jump to the majors.

After all, Beck is 18 and has lots of room to grow. Its only year one, so it shouldn’t be surprising if he takes a few years to find his step. After all, it’s not like the Canadiens are immediately going to need his offense amidst a long term rebuild.

Prospect Owen Beck on signing a three-year entry contract with the Habs while having a great training camp: https://t.co/gE15TBqANI#TSNHockey pic.twitter.com/yh78Sob9vc