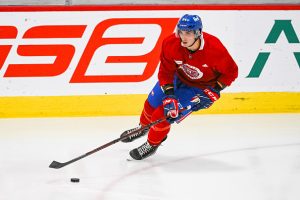 The Montreal Canadiens announced this morning that 2021 first-round draft pick Logan Mailloux has signed an entry-level contract. Mailloux was drafted 31st overall in the 2021 draft after Montreal’s Cinderella run to the Stanley Cup Finals. Mailloux was a controversial pick at the 2021 draft due to legal issues in Sweden after having non-consensually filmed a sexual act.

The Canadiens have agreed to terms on a three-year, entry-level contract (2022-23 to 2024-25) with defenseman Logan Mailloux.#GoHabsGo https://t.co/3gMKHseMsd

The Belle River, Ontario native has seen some short success with the London Knights of the OHL. Mailloux played 12 games in London during the 2021-22 campaign, being cut short by suspension and injuries. In these 12 games, Mailloux had 9 points and served 13 penalty minutes.

While on loan in Sweden playing for SK Lejon of the HockeyEttan league, Mailloux non-consensually photographed a sexual act he was involved in. The Swedish court system fined him approximately $2100. Upon return to North America, Mailloux sent out a message renouncing himself from the 2021 draft.

Prospect Logan Mailloux has renounced himself from this weekend’s NHL Draft, asking teams not to select him following a criminal charge while playing in Sweden late last year: https://t.co/HA7aw8rzrW pic.twitter.com/Pt5aFQfyLg

The Montreal Canadiens, under the former management of Marc Bergevin opted to draft Mailloux anyways, as no player can actually withdraw from the draft. This decision was rightfully met with outrage from fans all around the league. It may have also been a main element in Marc Bergevin’s firing as general manager.

Mailloux was suspended from the OHL indefinitely to start the 2021-22 campaign, however, on January 1st, after having missed 26 games, Mailloux was re-instated.

Logan Mailloux is a very big right defenseman with a strong shot and fantastic physicality. This led him to being ranked as high as the top fifteen on some draft boards prior to the controversy. However, Mailloux’s game lacks in the Hockey IQ department. He sometimes gets lost on the ice and is inefficient in his zone. His offensive game shines at times, but it is somewhat inconsistent. There is a clear upside to Mailloux, and if the Habs are able to develop him properly, both on and off the ice, they may have a real player in Mailloux.

Barring an entry-level slide, Mailloux’s contract will carry through the 2024-25 season, and he will expire as a restricted free agent. The contract carries an annual average value of $835,833, including a signing bonus of $92,500.

Logan Mailloux will go down as one of the most controversial draft picks of all time. Despite having renounced himself from the draft, the Montreal Canadiens opted to face the controversy and pick him anyways. The move will forever put a blemish on one of the most highly-respected organizations in all of professional sports. However, management believes that Mailloux is on the right path, and the contract is a big symbol of faith in his development as a player and as a person. He will join the exciting crop of young defenders in Montreal, alongside Justin Barron, Kaiden Guhle, Arber Xhekaj and Jordan Harris.