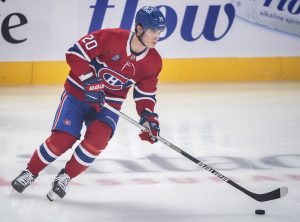 The NHL Department of Player Safety announced Montreal Canadiens rookie forward Juraj Slafkovsky has been suspended two games. This announcement was made early Wednesday evening. It is the first career suspension for the 18-year-old forward.

The Slovakian forward boarded Detroit Red Wings forward Matt Luff during the Canadiens 3-2 shootout victory over the Wings on Tuesday night. Slafkovsky earned a five-minute major and a game misconduct for the hit. Luff suffered a broken wrist and will be out 10-12 weeks after undergoing surgery.

The first overall pick of the 2022 NHL Draft missed Wednesday night’s game against the Vancouver Canucks and will sit out Saturday’s game against the Pittsburgh Penguins. Slafkovsky is Montreal’s second forward to be suspended two games in less than a week. Josh Anderson also received a two-game ban after  for boarding Vegas Golden Knights defenceman Alex Pietrangelo on Saturday.

Hopefully the rookie forward can learn from this and stay out trouble. Slafkovsky has three goals in his first season with the Canadiens. He’s shown why he was taken number one overall in the draft at various points in the season. However, he’ll miss two games against opponents that haven’t gotten off to the best start this season.

The Slovakian forward will forfeit $10,270 in salary that will go the league’s player assistance fund. He’ll be eligible to return Nov. 15 when the Canadiens host the New Jersey Devils. Montreal is currently 6-6-1 with 13 points and seventh in the Atlantic Division.