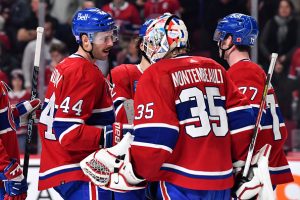 12 games into the season, the Montreal Canadiens sit 23rd in the NHL with a 5-6-1 record. The Habs were expected to be bottom feeders this year but have impressed many with their play despite a losing record. The Canadiens are a team full of youth and the young guns have come to play thus far. However, the Canadiens’ vets have failed to provide the team with the needed secondary scoring. This raises concern for the team for several reasons.

The Canadiens’ veterans have struggled to produce, putting pressure on the Habs’ young guns. However, they have not faltered under the pressure. The top line of Cole Caufield, Nick Suzuki, and new addition Kirby Dach are leading the way offensively. Caufield has 14 points on the year while Suzuki leads the way with 15, including eight goals each. Dach has managed 10 points himself including a team-leading eight assists. The next closest player is Sean Monahan with eight points. Monahan has rebounded nicely for the team thus far but beyond him, there are secondary scoring issues.

Kaiden Guhle has five points, equal to Josh Anderson‘s point total and more than the likes of Brendan Gallagher, Evgenii Dadonov, Mike Hoffman, Jonathan Drouin, Joel Armia, and Christian Dvorak.  None of these players have more than four points on the year. This is not enough production from the middle-six veterans to provide the Habs with the necessary secondary scoring.

The Canadiens are expected to sell at the deadline but the lack of production from the aforementioned veterans makes those contracts more difficult to move and it lowers their trade value. The Habs expect to be able to sell a few of their veteran forwards and package them for prospects and picks in a loaded 2023 draft. Skaters like Dadonov, Hoffman, and Monahan are extremely likely going to be dealt at the deadline. Drouin, whose contract expires at the season’s end, is also a likely trade candidate. The Habs may also look to ship out players with term like Armia, Gallagher, and Anderson, depending on the market. While the Habs won’t deal all of these players, they need more production out of them regardless.

While the Canadiens’ lack of secondary scoring is an issue, there is still a silver lining. The lack of production means fewer goals, which means fewer wins for the Canadiens this year. The worse the Habs do the more likely they are to win the Connor Bedard Sweepstakes this summer. The 2023 draft class is also loaded with high-end talent behind Bedard. Adam Fantilli, Matvei Michkov, and Leo Carlsson could also be targeted by the Canadiens. With Kirby Dach thriving on the top-line wing, the Habs could look to add a top-end centerman via the draft. A top 5-10 pick in this year’s draft is a great consolation prize for the team if they can’t add more picks via trade.

The secondary scoring drought by the veterans won’t last forever, as having this many forwards slumping simultaneously is rare. Ideally, the Habs are able to move on from a few players at the deadline.  They also hope to acquire another first-round pick as well as more prospects to add to their already outstanding pool. Once the secondary scorers start to produce alongside Caufield and Suzuki, the Habs will be a deep offensive team that could continue to play above expectations. But in the end, even if they don’t get the secondary scoring they need, Habs fans shouldn’t be too disappointed with a top-10 pick in this draft.