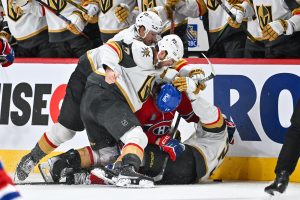 The hit came with 9:54 remaining in the third period of Saturday night’s game. Pietrangelo was carrying the puck up the boards, loses control of the puck and slows in an attempt to re-gain control of the puck. He then turns his body to protect the puck and in doing so had his numbers facing Anderson. Anderson then hits through Pietrangelo dangerously knocking him into the boards. The NHL Department of Player Safety provided further explanation on their decision:

“It is after Pietrangelo pivots to face the wall that Anderson changes his skating lane, making an adjustment of his own to turning sharply into Pietrangelo’s backside to deliver a hit,” a Department of Player Safety official said.

“While we acknowledge that Anderson was attempting to make a hit through the shoulder as Pietrangelo was spinning, the onus is on Anderson to deliver this check in a legal fashion, minimize the force of the contact or avoid the hit entirely. Instead he hits forcefully into Pietrangelo’s back, driving him dangerously into the boards.”

Thankfully, Pietrangelo was not injured during the play. It appears as though his helmet and visor caught the impact protecting his face from possible serious injury. Following the initial ruling, there was comment from the Golden Knights on the hit and the following consequence. Vegas Golden Knights head coach Bruce Cassidy has this to say about the ruling:

“I don’t like it. It’s unnecessary to me. But we dealt with it. I thought our guys stuck together. And I thought it was the right call on the ice.”

Golden Knights forward Reilly Smith spoke up regarding his thoughts as well:

That’s tough. It’s a dangerous play, I don’t know what was going through his mind. But if you see a player turn his back around like that, the last thing you do is try and run him through the boards,” said Smith.

Under the terms of the Collective Bargaining Agreement, Anderson will forfeit $59,459.46 as a result of the ban. The money goes to the Players’ Emergency Assistance Fund.