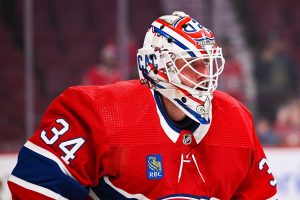 The Montreal Canadiens extended goalie Jake Allen on a two-year contract worth $3.85 million per season, the team announced Saturday morning. The contract will take effect in 2023-24.

In a reversal of recent trends, a piece of the Canadiens’ 2021 Stanley Cup Final run is staying around. Jake Allen will be in a Habs uniform for the next three seasons. Allen has spent the last two years as a part of the Canadiens, being a part of a trade package that sent draft picks to the Blues. He then signed a two-year extension with Montreal, with his current contract ending after the 2022-23 season.

Allen served as the starter for the Canadiens last year after Carey Price was out for the majority of the season with injuries from the Stanley Cup Final. Allen posted a 9-20-4 record, with a 3.30 goals-against average and a .905 save percentage. He did suffer an injury halfway through the year, cutting his season short after only 35 games.

He spent the majority of his career with the St. Louis Blues, before being traded to the Canadiens in the 2020 offseason.

For Allen, this is a chance for him to get his feet under him in Montreal. It may allow him to return to what he was in St. Louis. He has served as a backup or 1B for the majority of his career, so hopefully, this allows him to get the chance to be a proven starter for the Canadiens in Price’s assumed absence.

Retaining Allen will help solidify the Montreal Canadiens goalie depth, and keeps around some championship pedigree. Allen was a member of the 2019 Stanley Cup-winning St. Louis Blues. Hopefully, his performance will improve over time, and the Canadiens can rely on him longer-term.