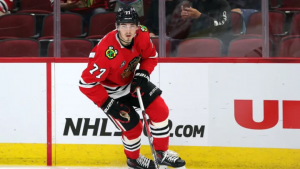 After being traded at the NHL Draft, restricted free agent centre Kirby Dach has signed a contract with his new team, the Montreal Canadiens. It’s a four-year, $3.3625 AAV contract that will carry him through the 2025-26 season. With much more to prove, this is a good deal for him at this time and a new change of scenery.

Dach will look to get his career back on track. He had a strong rookie year, but a wrist injury at the 2021 World Junior Championships cost him most of the 2021-22 season. This was followed up by a disappointing year for nearly everyone on the Chicago Blackhawks in 2021-22.

The former 3rd overall pick may not have lived up to the hype of his taking. He is still a good player in his own right. But so far to start off his career, he has skated in 152 games and has scored 19 goals and 40 assists for 59 points. Last season, in 70 games played he only scored nine goals and 17 assists for 26 points. What’s wild is that he finished sixth in points amongst Blackhawks forwards.

Dach finished with a Corsi-For at 42 percent and an on-ice expected goals percentage at 47.6 percent. As a centre he finished with a faceoff wins percentage of just 32 percent, one of the worst in the entire NHL. He did lead all Blackhawks forwards with 44 blocked shots.

What This Means For The Team

There was a reason why Dach was taken 3rd overall behind New Jersey Devils centre Jack Hughes and New York Rangers winger Kappo Kakko. The potential in his game is there, it is just a matter of putting it all together. A change of scenery could be the kick in the butt he needs or the coaching change that could help him rediscover his game. The deal is team-friendly, and getting a player that is young and has the talent inside him somewhere can help.

What This Means For The Player

Kirby Dach needed a new contract, and he finally got one. It has to be frustrating for Dach at times. I am sure in the back of his mind; he wants to produce more and be a factor. For him, this is a good deal, and it allows him to go out there and prove himself further. He can find a way to discover his game and contribute down the lineup. The opportunity for him to succeed is there and he can now go out there and do it. He can focus on hockey and no longer has to worry about his contract.

The post Kirby Dach Signs With The Montreal Canadiens appeared first on Last Word On Hockey.