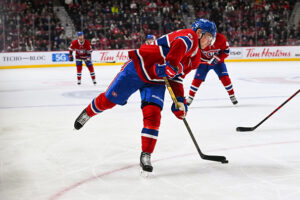 The Montreal Canadiens have traded forward Artturi Lehkonen to the Colorado Avalanche in exchange for prospect Justin Barron and a second-round pick. Lehkonen has spent his entire NHL career with the Canadiens and was drafted 55th overall by them in 2013. He didn’t join the team until the 2016-17 season. The Canadiens are also retaining 50% of Lehkonen’s salary.

The Canadiens have traded forward Artturi Lehkonen to Colorado in exchange for defenseman Justin Barron and a 2nd-round pick in 2024.

Artturi Lehkonen will not play for the Canadiens for the first time in his NHL career, as they have dealt him to the Avalanche.  Lehkonen, 26, has 13 goals, 16 assists for 29 points in 58 games so far this season, on a woeful Canadiens roster.

Lehkonen played a big part in Montreal’s run to the 2021 Stanley Cup Finals. He scored the overtime goal in Game 6 of the Western Conference Finals against the Vegas Golden Knights to win the series. This goal clinched the Canadiens’ first Clarence S. Campbell Bowl in franchise history.

What This Means For The Future

Although he was young and could’ve been a useful piece in the Habs’ rebuild, GM Kent Hughes and Jeff Gorton saw that they could get some value out of him. Lehkonen comes into the Avs as an inexpensive and young depth forward, something that is currently commanding a lot of value this year. The Avalanche are loaded both at forward and defence. Lehkonen is a perfect fit to help round out some much-needed depth if they want a long playoff run.

Lehkonen is on a deal that expires in the summer. This is crucial for the Avs as they will be looking for all the cap space they can find in the offseason. He could return to Montreal if he wanted or sign an extension if he wants to. He’ll most likely want a salary somewhere around his previous contract, with a longer-term than just one year.

In Barron, the Habs get a promising young defence prospect along with a second-round pick. The rebuild continues in Montreal and that is two very solid assets to add.